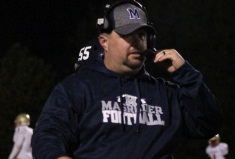 Entering the 2022 season, Coach Fowle is beginning his fourteenth season as a member of the Magruder Football staff, and his ninth season as Head Coach.  Prior to being named Head Coach, he spent four years as a Varsity assistant and one year as Head J.V. Coach.

Coach Fowle graduated from Magruder in 2004, where he played football, basketball, and baseball for the Colonels.  After graduating, he attended Millersville University of Pennsylvania where he was a four-year starter on the offensive line.

Coach Fowle is entering his thirteenth year of teaching in Montgomery County, all of which have been at Magruder.  He is married to Jaclynn Fowle, and they have two daughters, Raegan and Cadence. 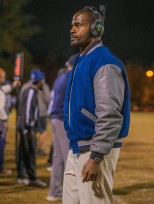 Coach McCray enters his first year on the Colonels’ sideline. Coach McCray has coached for over a decade collegiately, including his most recent stint as the Defensive Coordinator at Ferrum College. In addition to coaching collegiately, he also spent one season as an assistant coach at Northwest HS.

Coach McCray is the College and Career Information Coordinator (CCIC) at Magruder. He is a Kennedy HS and Salisbury University alum, where he played football.

Coach Prather is a Magruder Alum, a member of the Athletic Department’s Hall of Fame. In high school, Coach Prather quarterbacked the Colonels to our first state championship. He played collegiately at Virginia Tech. 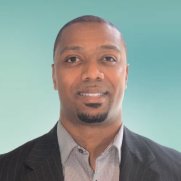 Coach Mac is entering his fourth year on the Magruder coaching staff. Prior to joining the staff at Magruder, he coached 11 years of college football, most recently in 2016 at Elon University. Prior to coaching in college, he also coached 2 years of HS in New Jersey.

Coach Mac currently works as a Local Real Estate Agent. He is the father of three.

Coach McDermott is a 2010 graduate from Clarksburg High School. He attended West Virginia University from 2010 – 2014. He majored in Physical Education and Health Education, with a minor in Personal Training. He has coached at Clarksburg HS as the Defensive Coordinator for the JV team from 2016-2017. Coach McDermott was the JV Head Softball Coach at Gaithersburg High School from 2016-2019. He is also a PE and Health teacher at Gaithersburg HS. He is currently serving in his fifth year on the Magruder coaching staff.

Coach Neal is in his second year, of his second stint on the sidelines at Magruder. Coach Neal previously spent 3 seasons as the Defensive Coordinator for Magruder from 2009-2011. Coach Neal graduated from Magruder in 1982, he was a three year starter for the Colonels. After graduation, he played football at the University of Maryland, and was drafted by the Denver Broncos. 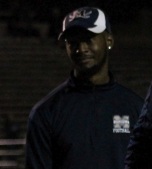 Coach Horan is entering his second season as the JV Head Coach at Magruder. Coach Horan teaches Social Studies at Redland MS. Coach Horan grew up in New Jersey, played football at Allegheny College. Prior to coming to MCPS, Coach Horan coached and taught in Mississippi.

Coach Pumphrey enters his first season with the program. He is a graduate of Gaithersburg HS.